Hello, all! Better late than never. I’m writing to hype up the awesome app called Spacecraft 3D, an augmented reality app available for free for iPhones and Apple products (and also for Androids, I think) by NASA.

Overview: This app requires you to download and print a PDF of pictures– markers– for the app to interact with. I used the included marker that focuses on Mars rovers. Once you have both the app and at least one copy of the marker sheet, just hover your phone/ tablet over one of the pictures and this happens: 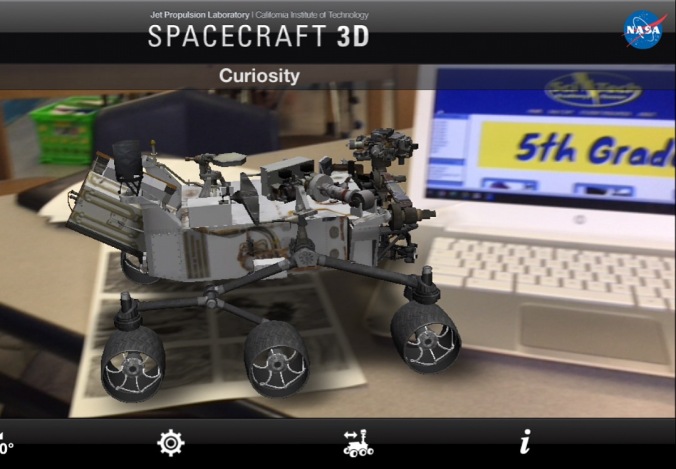 When you hover your tablet or phone over an image of Mars that a specific rover explored, said rover appears as a 360 degree view 3D image! In the image above, you are viewing the Curiosity.

The image is also interactive. If you click the icon of a mini rover (second from the right), most of the images will move. For instance, the Mars Exploration Rover will unstow and open up. Others have things attachments that unfold when engaged.

If you do not have access to a printer and want to mess around with this app, you can pull the markers up on a different screen and hover the Spacecraft 3D app over the screen.

Once students have explored a rover’s movement and build, they can click the icon all the way on the right that is an italicized I. This will provide a non-fiction text listing the proportions of whichever specific rover you are exploring, as well as launch information, and the history of the vehicle.

Application: I had a worksheet with specific questions about each rover for the students to answer as they explored. This was a station of about 7 students in my classroom on a day that the students explored how technology enhances space exploration. Each student at this station had a marker, and most had a tablet or phone to hover over the images. I also had a station with a telescope and questions, and a station with a reading about “planet 9” on NewsELA.

Reaction: The students were FLOORED!!! Every student was trying to stick their hand through the image, and once they realized that they could interact with the images, they were literally grinning ear to ear. I wish I took pictures, but I needed my phone at the station for the students to use.

“This is a real thing! Ah! This was really on Mars?!!!”- confused and excited student.

Pros: This app really helped the students understand rovers better. They were able to learn that they are smaller than rocket ships, they were able to read about each rover, and they were able to see how versatile each spacecraft is with the interactive component. The students at this station were 100% engaged, and have been asking me to help them download the app and print markers that we did not use in class (yet!).

This app is a perfect match for the following standard:

ES47: Identify and explain advances in technology that have enabled the exploration of space

Cons: You really have to man this at a station or however you first present this to your class. I know that at my school, the students do not normally use technology like this, and I really had to walk them through the features. To help with this, I trained several “experts” from my homeroom, and went through the app ahead of time with them. That way, they were able to help the students throughout class.

Another problem I had is that although I asked all week for students to bring in phones and tablets, only about 5 per class brought them in. This app would be more ideal if I had a class set of tablets already set up with the apps I wanted– which is my goal for 2016-2017.

Last note: If you teach space in your science curriculum, give this app a try! Don’t be afraid of management- the students will be so shocked and fascinated by NASA’s Spacecraft 3D that they will be on their best behavior in order to participate!  I am already trying to figure out how to get iPADS for next year to do more stuff like this. KIDS ARE STILL TALKING ABOUT HOW AWESOME THIS CLASS WAS!